New Discoveries in Lake Baikal by the MIR Submersibles

As seen in Ocean News & Technology

Construction of the MIR-1 and MIR- 2 submersibles was completed in October 1987. The first deep dives of the vehicles were conducted in the Atlantic Ocean on December 12 and 13, 1987, MIR-1 to 6,170m and MIR-2 to 6,120m. On December 17 the acceptance protocol for the MIRs was signed and the vehicles prepared for their first scientific expedition.

During the 22 years following, the MIRs have performed over 1,000 scientific and technical dives. The MIRs have dove on 22 hydrothermal fields located on the bottom of the Atlantic, Pacific, Indian, and Arctic oceans. The MIRs surveyed new hydrothermal vents sites, discovering wide deposits of metallic sulfide ores, and hundreds of species of animals adapted to a food chain based on chemosynthesis, a biological conversion of inorganic molecules into organic matter in a process devoid of sunlight.

Read the rest in 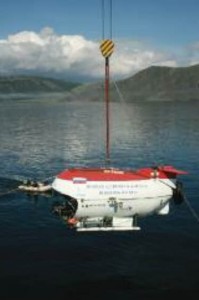 New Discoveries in Lake Baikal by the MIR Submersibles