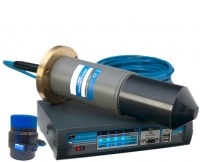 Enquire about this product

The MicronNav system is an innovative USBL tracking system designed for small ROV / AUV. It has been primarily designed to be used in conjunction with the Tritech Micron sonar and other Tritech Micron products.

MicronNav uses the very latest in Spread Spectrum acoustic technology, which provides a robust method for communications between the dunking transducers and the vehicle responder/ transponder.

The USBL Tracking System can be used as a stand-alone unit, powered by and communicating with the MicronNav through a spare RS232 port on the ROV (at 9600 baud) or RS485 through a spare screened twisted pair in the umbilical. Alternatively, it can be integrated with the Tritech Micron sonar communicating via the sonar RS232 aux port.

The USBL transducer is designed to provide 180-degree hemispherical coverage below the transducer, allowing vehicle tracking in very shallow water. The design of the ROV MicronNav transducer provides omnidirectional coverage.