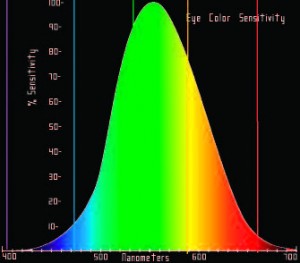 Figure 1. The human eye’s sensitivity to
color is shown in this illustration. The
color vertical lines are the wavelengths of
common lasers.
The first laser (“Light Amplification by the Stimulated Emission of Radiation”) was first demonstrated in 1960 at Hughes Research Labs in California, just 50 years ago, the same year the bathyscaph Trieste made its deep dive to the floor of the Mariana Trench. It was Einstein, who else, that proposed the science of lasers in a paper in 1917.

Diode lasers, or “semiconductor lasers”, are considered distinct from solid state lasers. “Solid State,” as it refers to lasers, is not in the electronics sense, but identifies the physical state of the transparent solids in which light-emitting atoms are contained. As you might guess, there are also gas lasers and liquid lasers. The solid, such as a ruby crystal rod doped with chromium atoms, transmits both the eternal excitation light and the internal stimulated emission light that cascades or avalanches to form the well known laser beam.

So if human eyes see green 10 times better than red, and green travels through water with less absorption, why use red lasers for underwater applications at all? The answer is wider temperature stability of the red laser diode, and greater cost of the diode pumped Nd-YAG green laser.

All lasers are based on the same principle: Light from an external source passes through the sides of a transparent material, or laser medium, to excite light-emitting atoms within. A single photon creates 2, that create 4, that create 16, in a process called cascading or avalanching. Parallel mirrors on opposite sides of a laser medium form a “laser cavity”. One mirror reflects all light back into the laser cavity, the other permits a fraction to escape as the laser beam.

In the Beginning there was Light

Human eyes are sensitive to light in wavelengths between about 400 nm (violet) to 700 nm (red). It is interesting to know that within the human eye, there are three types of cones that are each sensitive to a different segment of the visible color spectrum: red, green, and blue (RGB). Like your color TV, the mix of RGB gives the perception of full color. People who are “color blind” are missing one set of cones. The human eye also contains “rods” that sense light intensity. Other animals may see different segments of the electromagnetic spectrum than humans. Ever wonder what infrared or ultraviolet looks like? 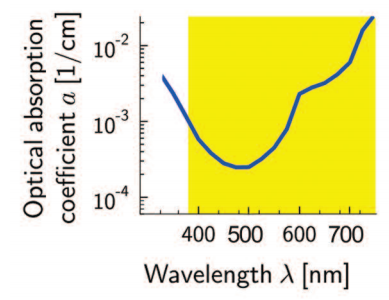 The optical absorption of light by water in the range visible to humans is least in the wavelengths of blue. (Adapted from Hale and Querry, Applied Optics, 1973).

Diode lasers share certain properties with LEDs, including the importance of the power circuit called the “driver”. When designed correctly, the driver safely controls the power applied to the laser diode under all circumstances. Lasers can be as much as 50% efficient in converting electrical energy to light. Drive circuits for laser diodes are either automatic power control (APC) circuits that maintain a constant light output power or automatic current control (ACC) circuits that maintain a constant current. The output power and wavelength of the laser diode can be affected by the changing of temperature. APC circuits provide a constant light output power despite variations in ambient temperature.

Outputs are referred to as continuous wave (CW), or pulsed power (PP), typically a 50% duty cycle.

The basic design of commercial diode laser is based on a “double heterostructure.” This consists of several parallel layers that have different functions. An active or light amplification layer is sandwiched between two cladding layers.

Diode lasers can also be designed to emit from the surfaces, known as “surface emitter” laser diodes. These offer a number of manufacturing advantages. Numerically superior are “vertical-cavity surface emitting lasers” (VCSEL).

A “diode pumped” solid state laser focuses the output of multiple diode lasers into a common laser rod to either combine power output or create harmonics of the excitation frequency. The best example is the diode-pumped, frequency doubled neodymium-YAG laser which emits at 532 nm (green) in the second harmonic. Nd-YAG is a hard brittle crystal with good thermal, optical and mechanical properties.

Diode lasers have an optimal temperature range. Red lasers have the broadest operating temperature range, -10 to 50˚C. Green lasers are narrower, 20- 28˚C. However, testing at DSPL shows that Class IIIa green lasers, even frozen overnight and placed in an ice bath, come up to full output power within 5 minutes. This is due in part to the inefficiency of the linear regulator driver that acts as a heater within the thermally insulating titanium or delrin housing, and in part to the use of an APC driver as described above. Beam divergence is the measure of the expansion of the beam over a distance. The beam divergence angle will vary depending on the laser diode system and the optics used within the system.

Beam shape may be elliptical or round. Supplemental optics may be used to create a single thin line. A video system maybe tied to an on-board computer to recognize which video scan line registers the laser line and, knowing attitude of the sub and angle of the camera, compute slope of the seafloor.

Even moderate-power lasers are potentially hazardous because they can inflict permanent eye injuries. To mitigate the risk, “classes” of lasers have been defined ranking power and wavelength, including those beyond the range of human vision. We are limiting our discussion to green and red. Caution must be paid by topside operators to be sure lasers are turned off during launch and recovery operations, as even reflections off the ocean surface can unexpectedly injure on-deck personnel if high-power lasers are used.

Underwater lasers are typically a Class IIIa or IIIb, based on ANSI Z136.1 and Center for Devices and Radiological Health (CDRH) regulation 21 CFR

Class IIIa has a power output between 1 and 5 mW. These lasers can produce spot blindness under the right conditions, mainly in combination with optics which change the beam diameter or power density, but are ordinarily harmless. Class IIIa lasers should have a Danger label and output aperture label attached to the laser and/or equipment. No known skin hazard or fire hazard exist.

Class IIIb has power output from 5 mW to 500 mW. This is admittedly a wide grouping. Class IIIb lasers are considered a definite eye hazard, particularly at the higher power levels, and will cause eye damage. These lasers must have a red DANGER label and aperture label affixed to the laser. An aperture cover cap is a recommended safety feature when the vehicle is secure on deck. Extreme caution must be exercised during launch and recovery of the laser system.

Operators and deck hands must wear safety goggles while working in the vicinity of Class IIIb lasers. A safety shutter designed to close when the laser is out of water is well advised. This may be a floating polypropylene ball captured in a fixture on the front of the laser. Should the laser be powered-on while out of water, the translucent ball will fall in the path of the laser beam, and the coherent beam will not cause injury.

Safety goggles that attenuate a large fraction of the power but permit the beam to be seen safely are recommended for use with Class IIIb lasers.

Pocket size laser power meters, such as the Sper Scientific 840011 pocket laser power meter, are ideal for lab, production, or field testing of diode lasers. The Sper unit reads directly in mW, and is calibrated at 633 nm. The unit provides an accurate power reading on any wavelength in the 400 to 1,100 nm range with the measurement adjusted to true by a conversion chart printed inside the case cover. The sensor wand may be extended for remote use. The digital meter displays digital readout, min/max, bar graph display, and over range.

This article is a brief glimpse of the exciting and useful technology of diode lasers in underwater applications. There’s so much more. How an APC driver works is really an interesting discussion in itself. There are books and courses devoted to the subject.