Understanding the Basics of Underwater Lighting 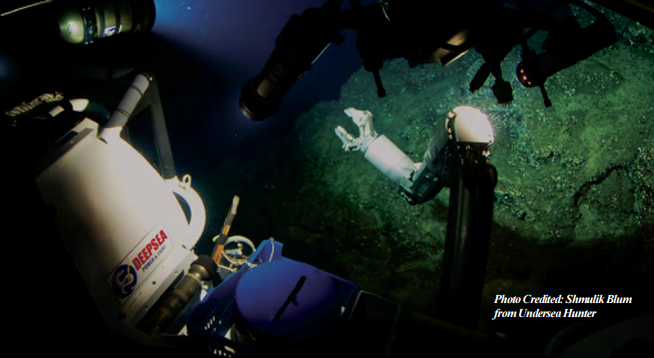 As seen in Ocean News & Technology

In subsea photographic and video imaging applications, one of the challenges that system designers, integrators, and operators face is bringing along all of the light they will need for tasks below depths of about 150 to 250 m. At these depths, an understanding of how light propagates through water helps designers and users balance mission requirements against the real-world constraints of underwater lighting while helping them make informed lighting choices. A glossary of terms in the sidebar is provided for reference throughout the article.

Illuminance (Lux, lm/m2): A measure of the amount of light incident on a surface. Used to describe intensity within a beam of light at a subject.

Total Illumination: Describes the combined total direct and indirect illumination on a subject. Helpful for evaluating the effectiveness of lighting.

Attenuation length (m): Distance light will travel before the intensity drops to 37% of the source intensity. Used to describe penetration of light underwater, and is a function of wavelength with blue-green light having longer attenuation lengths than red or yellow light.

Light in water exhibits behaviors outside of the range of day-to-day human experiences. These behaviors are the result of the interplay of phenomena from the atomic scale to the macroscopic life that permeates the oceans. Light no longer follows straight lines from source to subject, and the inverse square law becomes a poor predictor of luminous intensity at a given distance from a source. 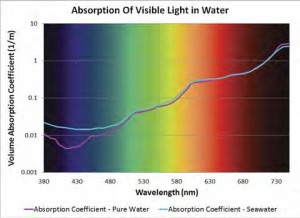 Characteristics of direct and diffuse illumination are governed by physical and practical limits related to a wide range of parameters from temperature, salinity, and concentrations of dissolved solids to the atomic structure of water molecules themselves. These parameters contribute to attenuation of the light by absorption and scattering phenomena, which exhibit a strong relationship to the wavelength of light (or the spectral power density) and the beam angle of the light source.

Direct illumination losses are primarily caused by the absorption of light in the water volume between the source and subject. Absorption of light in pure water is generally dominated by the interaction of photons with water molecules. As a photon contacts a water molecule, it is absorbed and converted to heat energy. This interaction has a strong dependence on wavelength, with light in the red and violet ends of the spectrum being strongly attenuated while blue-green region of the visible spectrum has minimal attenuation. This is what gives seawater its strong blue-green appearance. Other substances in the water— such as suspended solids, biological matter, and dissolved organic matter—may further attenuate light and tend to do so more in the blue wavelengths. In coastal and estuarial waters where the concentration of organic matter and other dissolved material is generally higher, the level of absorption can increase and additional absorption in the blue spectra will cause a general shift towards green. This explains why coastal waters are typically greener in appearance than in the open ocean (See Figure 1).

Scattering describes a wide range of phenomena that generally break down into small variances within the light path, refracting or reflecting part of the light away from the original direction of travel. These variations are caused by temperature transitions, suspended particles, dissolved solids, and biological “snow.” Although there is a relationship between wavelength and some scattering phenomena, the strongest contributors are generally not heavily dependent on the color of the light. The particular components contributing to scattering may vary significantly from sample to sample, but the general pattern of scattering in natural seawater is consistent. Some of the scattered light will return to the main beam, reach the subject, and contribute to the total illumination. In fact, at distances greater than one to two attenuation lengths from the source, the scattered or diffuse component of total illumination will become significant and begin to overtake and exceed the direct illumination component.

The color content of an underwater white light source will desaturate due to absorption and scattering and approach the color of a monochromatic source (Figure 3). Attenuation limits not only the total illumination of a target, it also constrains the useful range over which color information is transmitted under water. This is due to the non-uniform spectral attenuation through the water (See Figure 2).

While it may help increase illumination at the subject, scattering also reduces the contrast between the subject and the background. In part, this is due to backscatter along the illumination path washing out the subject as well as scattering of the reflected light from the subject itself blurring the image. Increasing total illumination of the subject will not improve contrast in this case because the scattering scales with intensity and no net increase in contrast will result. This imposes practical limits on the distance at which an object can be detected in contrast-limited imaging applications like human vision or film. Fortunately, for electro-optical imaging applications, the signal-to-noise ratio at the detector determines detectability of a subject more than the contrast. The signal-to-noise ratio will increase with the square root of the total illumination of the subject. For instance, if there is a 10X increase in the subject illumination, there will be about a 3.1x increase in the detectability of a subject against an ocean background. 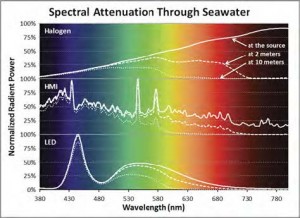 Why Does All of This Matter?

Different tasks underwater impose unique constraints and requirements on the system. The balance between lighting properties and practical limits must be based on the intended application. Understanding how to evaluate a light for the mission requirements and how lighting parameters change underwater is critical for system designers.

For instance, when designing illumination for remotely operated vehicle (ROV) piloting, the main objective is to provide the pilot with sufficient visual information about his surroundings to be able to safely maneuver to the work site, avoid hazards, and be alerted to nearby obstacles. This necessitates high contrast and high signal-to-noise ratio in the imaging system as well as broad, diffuse light sources that can be optimized for the local scattering conditions. The parameters with the most importance in this application would be total luminous flux, spectral content, and dimming range. Using higher CCT lighting (>5000K) helps ensure that less of the power emitted by a white source will be attenuated. Selecting a light with a high luminous flux will ensure that sufficient light is available to boost detectability for low contrast subjects or distant objects. Depending on the operating environment, dimming may also be critical in this application. Since conditions at a site can vary drastically, the ability to dim down the light source allows the pilot to compensate for high backscatter.

Figure 3 – Color shift underwater with a 90-CRI
LED light source at 0.75m, 1.25m, and 2.25m
from left to right.
In a High Definition (HD) imaging application for inspection tasks, biological surveys, or archeological expeditions, the lighting requirements impose a very different set of constraints. For these applications, color accuracy, uniform illumination, and high angular contrast are key. HD imaging particularly benefits from a full, rich color space, which helps differentiate species in biological surveys or distinguish between natural surface variations and corrosion on a subsea structure. Color accuracy is most closely described by CRI parameters, but attenuation causes the spectral content of the light source, even a high CRI source, to change drastically over the distance to and back from the subject. This sets practical limits on imaging distances and the minimum illumination where color accuracy is needed. In some cases, supplemental monochromatic sources are required to boost spectral content in the highly attenuated portions of the visual spectrum. For a given imager size, sensors used in HD imaging have lower sensitivities than their standard definition counterparts and generally require more light. The higher resolution of HD imagers is also more sensitive to scattering from the reflected light off a subject since more subtle angular separation of light is detectable in the captured data. The scattering behavior of light underwater is proportional to the beam angle of the source. Having more tightly collimated light sources helps reduce scatter at longer distances and takes full advantage of the detector resolution.

Why Choose LEDs for Underwater Lighting?

Solid state lighting technologies are supplanting incandescent, fluorescent, HMI, and HID lighting in many applications— and for good reason. LEDs prove to be highly efficient and extremely flexible solutions. They are well suited to nearly every lighting application, including subsea imaging. Using LEDs, system designers can optimize a variety of the lighting characteristics discussed here for a particular set of requirements. CCT, lumens, lux, CRI, color, and beam patterns are all tunable characteristics within the standard selection of LED devices and provide the system designer with an unprecedented level of flexibility within a single lighting technology.

LEDs are also intimately tied to the semiconductor industry and benefit from the same economies of scale, product improvement cycles, and R&D investments that drive forward other consumer electronics markets. Other technology trends from the semiconductor industry and the consumer lighting markets continue to push innovative solutions for drivers and control systems, allowing for lighting solutions that were never before possible.

Understanding the Basics of Underwater Lighting, ONT, May 2013